A compact and low cost solution to extend the life of your SMEMA based SMT electronic assembly equipment.

Your building blocks towards a Smart Factory

The Hermes Standard is a successor of SMEMA (IPC-SMEMA-9851) replacing simple opening and closing of circuits and dedicated wiring to define Ready signals, with XML messages sent via ethernet.

The use of XML means not only control messages can be sent between manufacturing equipment but also printed circuit board (PCB) data for automatic equipment setup and product traceability.

The Adaptor then takes the Upline Hermes control messages and converts them into SMEMA signals. It does the same with the Downline SMEMA connector of the non-Hermes compliant assembly equipment but in reverse by converting the SMEMA ‘Good Board’ and ‘Bad Board’ signals into Hermes messages for Downline equipment.

While this sequence occurs the Adaptor stores the Hermes PCB data so it’s not lost for onward travel down the production line. The PCB data is then re-paired with exiting PCBs on a First In, First Out (FIFO) basis and Good Board, Bad Board data updated.

The non-Hermes compliant equipment will not have access to this PCB data however the Adaptor has a RS232 serial connection so equipment such as conveyors can extract PCB widths for automatic setup.

The Adaptor has been initially created to fill the void of equipment that has historically had little intelligence therefore it becomes challenging to apply the Hermes Standard to it. This is commonly ‘dumb’ equipment such as PCB Conveyors that only currently work with SMEMA.

The second group is equipment that has fallen out of a service plan either by its age or due to second hand use, and so suppliers are unwilling to upgrade its control software. The final group are equipment suppliers that want to distance themselves from supporting a software standard that is currently a moving target.

We don't recommend using the Adaptor as your first step towards a full Hermes production line, you should instead contact the suppliers of your larger intelligent equipment and understand their timelines of upgrading your equipment’s software.

The Adaptor however is a great tool to understand the Hermes Standard and how it may benefit your production and how it could be used as a smart factory innovation drive.

Navigate to the lower half of this page to discover other uses for the Adaptor. 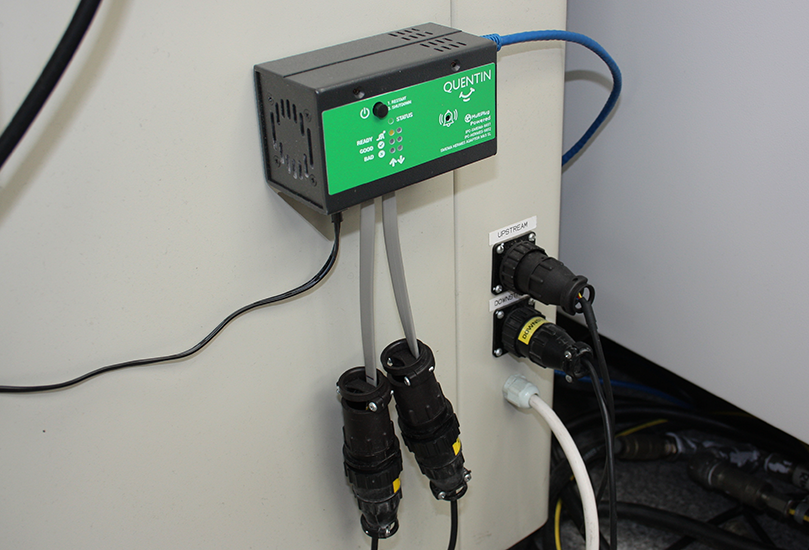 AKA the SMEMA Hermes Adaptor

Connecting Manufacturing to the Digital Economy

The Digital Economy has grown over the last 30 years and the people that work within it use the Web Browser has their native user interface. To employ their skills into the Manufacturing industry we must use the same technologies to talk the same language. While the Adaptor is a Headless device in normal operation, Setup and Monitoring is conducted by a Browser based user interface. 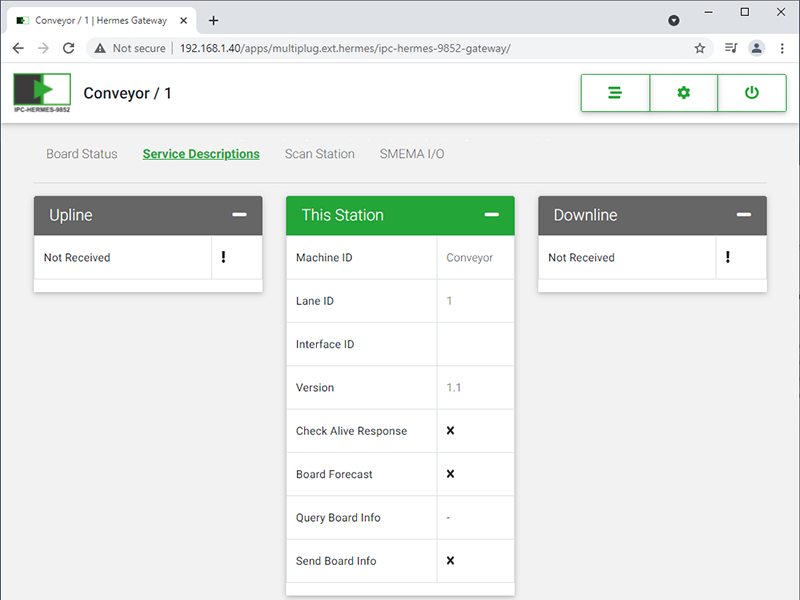 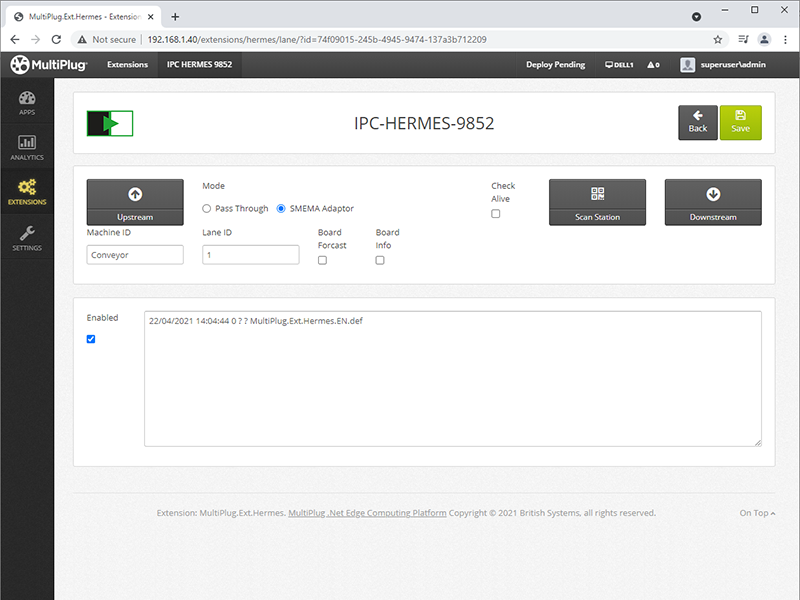 As a device with a defined purpose, the Adaptor will fulfill that purpose, but we now work within the Industry 4.0 era where shop floor technicals should be able to customise their solutions based on their changing needs. If that means the injection or extraction of data at given points, then a true Industrial Internet of Things (IIoT) based product should give the option for change.

The Adaptor runs the MultiPlug Edge Computing Platform that allows additional functionality to be loaded by Software Extensions. The Hermes Standard is one such proprietary Extension but other Open Source Extensions can be loaded. New Extensions can be created using the .Net programming language.

The MultiPlug uses the Publish–Subscribe design pattern where events are mapped to subscriptions using a visual web browser editor making it fully flexible for changing needs.

Other Uses for the Adaptor

During the development of the Adaptor we have been approached by equipment suppliers who either want to support existing legacy equipment in the field on behalf of their customers or were interested in keeping the Hermes Standard upgrade solution modular but seen to be part of their existing offering.

We can supply the Adaptor in an unenclosed raw state which can be mounted as you see fit and wired using the RJ12 connectors. It is also possible to directly interface with the Single-Board Computer which means you wouldn’t use our SMEMA interface hardware however you, and your customers would benefit from the Hermes MultiPlug software and ongoing support.

The Adaptor features USB ports and a RS232 serial port which a barcode scanner can be connected to. This means it will be possible at the start of a Hermes enabled production line to either use a scanned barcode as that PCB’s identification for downline Hermes use, or retrieve the PCB data using this scanned barcode from a Manufacturing Execution System (MES), Database or IPC-CPX connection using another MultiPlug Extension dedicated to that task.

It may be useful to pause a production line due to an unrelated Hermes situation and rather than stop the equipment locally, a remote stop triggered by a remote user action or third party system. This is possible using the REST API which can control all SMEMA I/O as well as using the Web Browser based user interface.

Also while the Hermes Standard intended to try to remove the need for Barcode Readers, it is possible to connect a barcode reader to the Adaptor to use it to double check that the board on the Conveyor is the same as the PCB ID of Hermes. SMEMA will interlock if the IDs are mismatched.

By purchasing the Adaptor you are future proofing yourself into an ecosystem that will evolve over time. The MultiPlug Edge Computing platform is currently proprietary software however Extensions can be developed open or closed source which allows functionality to be increased over time.

The IPC-CFX will be an obvious next step MultiPlug Extension and similar functionally that is currently available for Hermes will be available for the CFX. Both standards could also be used in tandem; Hermes for linear production line data movement and CFX for vertical data movement. The speed of the creation of a CFX Extension will be decided by customer demand.

The SMEMA interface can easily be repurposed for general Input and Output. A single lane SMEMA interface consists of 3 switch circuits (1A 30 VDC max) and 3 circuit detectors (open or closed). So could be easily used to trigger visible indicators such as beacons (Outputs) and connected to switched circuits (Inputs).

The state of these I/O can then be mapped within MultiPlug to trigger off other events such as a HTTP Post request to a third party system, Or use the MultiPlug REST API to toggle the state of the output I/O.

The project of creating the Adaptor has only been made possible by the collaboration between investors, suppliers and innovators.

It started in 2019 with no customer backer or even contact of the Hermes Standard committee. It’s only thanks to visionaries that identified a limitation of rolling out Hermes to the masses with legacy equipment. A Startup business with founders who had previously worked within the industry was ideally placed and keen to enter the market with a new product. An initial prototype was developed with support of the Barclays Eagle Labs, Westbourne and rolled out to a number of beta sites to begin trials. With these trials successful and feedback gained European Regional Development Match Funding was secured after attending an business pitch event in Poole, Dorset. This funding was administered by the Arts University Bournemouth who also provided access to prototyping facilities for further development. In 2021 an electronics contract manufacturer in Poole assembled the first batch of Mk3 Adaptors ready for increasingly growing customer demand.